50 ways we changed the world

The Institute of Occupational Medicine 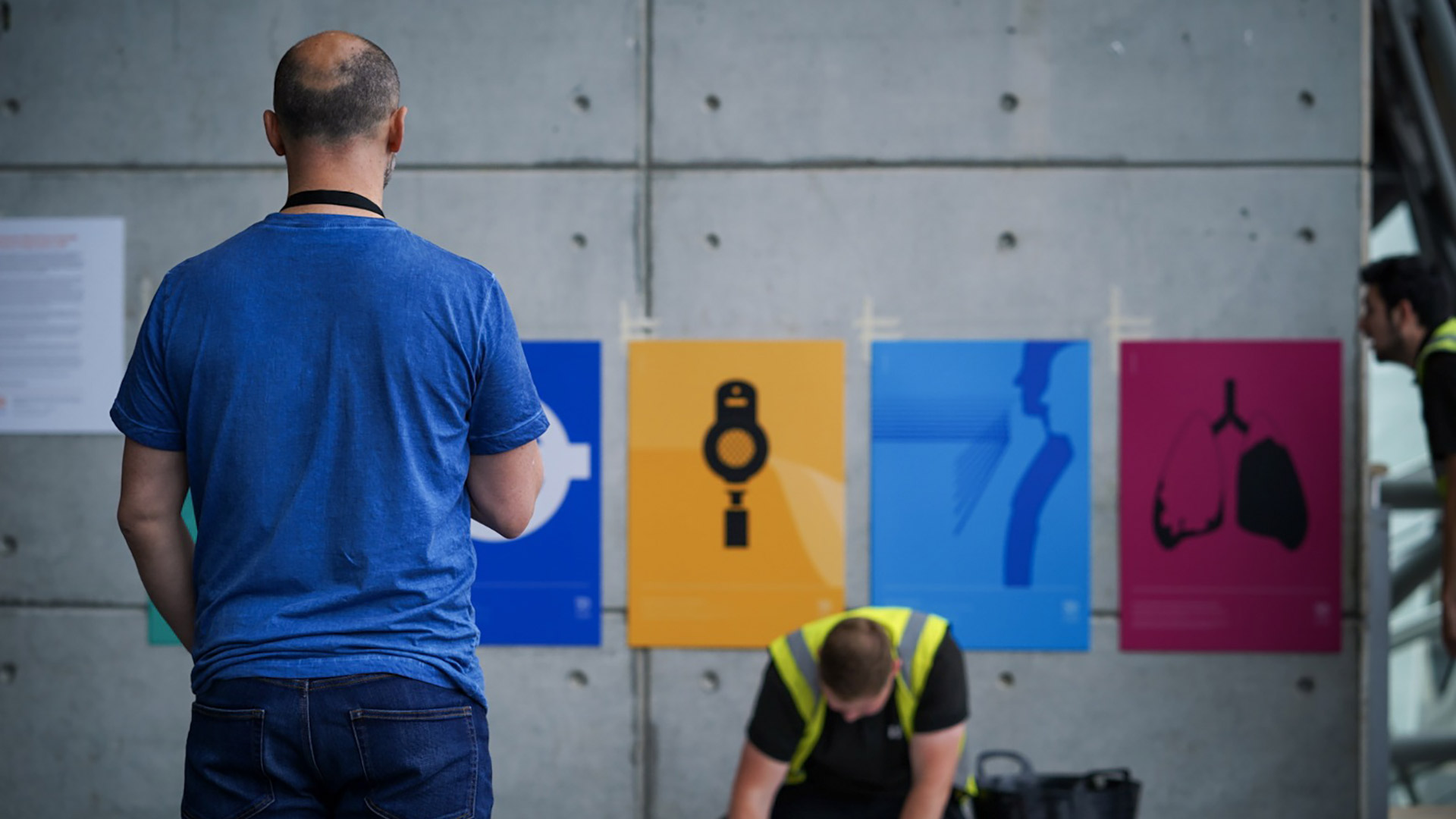 A 12 month campaign to celebrate the 50th year of the Institute of Occupational Medicine.

IOM do crucial scientific work to mitigate occupational and environmental health risks. They were turning 50 and wanted us to help them make it special.

They had never commissioned any creative marketing campaigns previously and our challenge was to take complex academic subjects and make them accessible and interesting. The campaign had to make IOM’s people proud of their achievements, inspire future employees and future scientists. A final challenge was set by our lovely client Aimee;

"The campaign needs to get us on the political agenda, and I’d love it if we could get on the news."

The amazing scientific impacts we uncovered gave us the confidence to suggest their science had made a real impact on the world leading us to the idea;

"50 ways we changed the world"

There's no better way to communicate concepts than distilling them down to poster form. We crafted 50 unique posters representing IOMs work as art.

To inspire young minds, the posters would become a travelling exhibition before taking permanent residence at IOM HQ as a reminder of their work over the years and as a source of inspiration for the years to come. 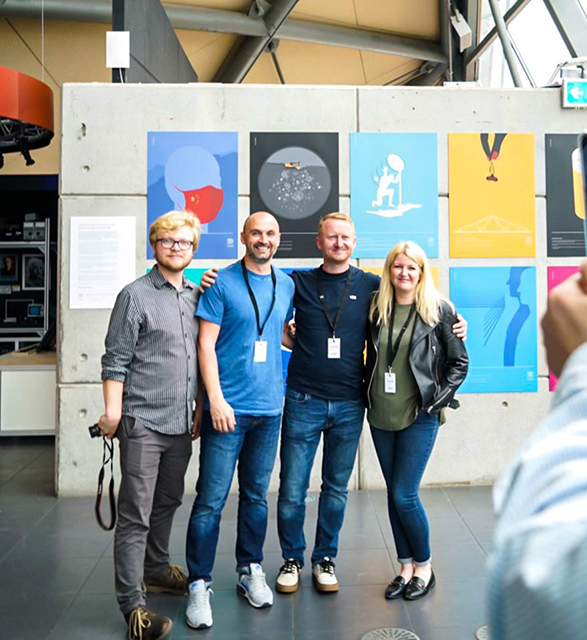 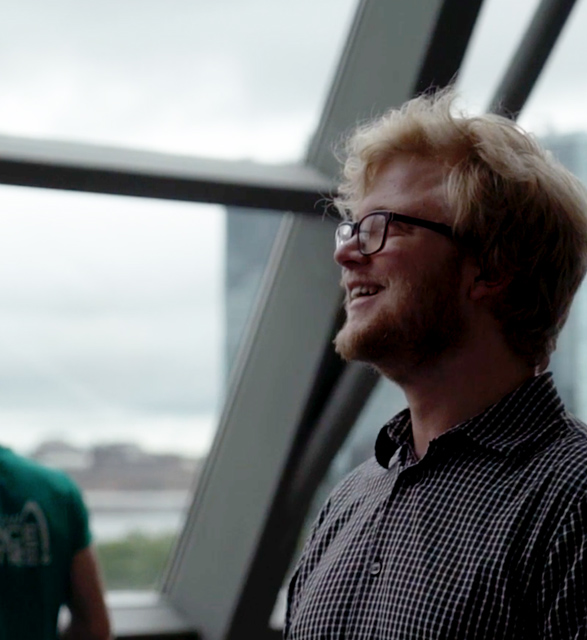 Our pals at the Glasgow Science Centre agreed to exhibit our posters to the general public for 9 months and gave us access to their 100ft screen. We created motion graphics for the screen to promote and raise awareness of the exhibition and filmed the exhibition install as video content for the campaign. 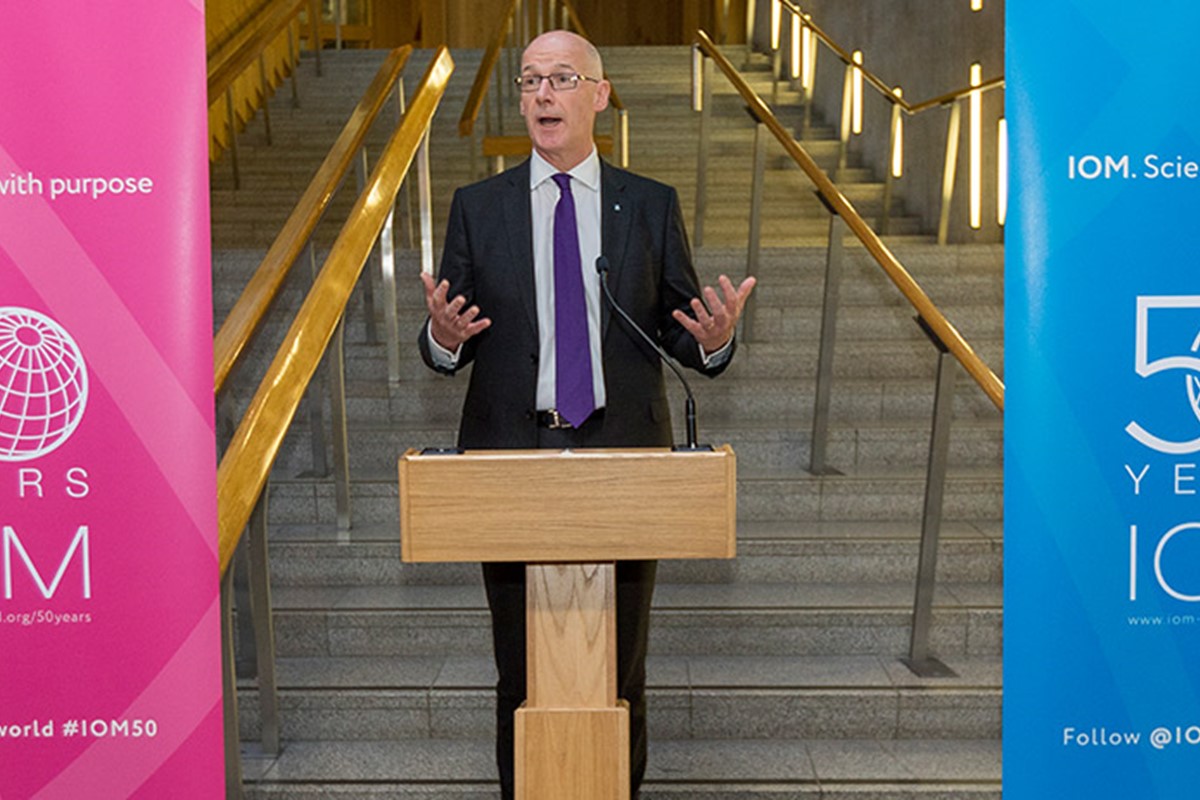 The road to Holyrood

Remember that part about getting on the political agenda? We discovered we could host our own event at the Scottish Parliament building if we could find an MSP to sponsor us. That MSP was Gordon MacDonald - pictured above meeting IOM CEO Rob Aitken which led to IOMs work and our campaign being recognised and debated in the Scottish Parliament and featured on bbc.co.uk. 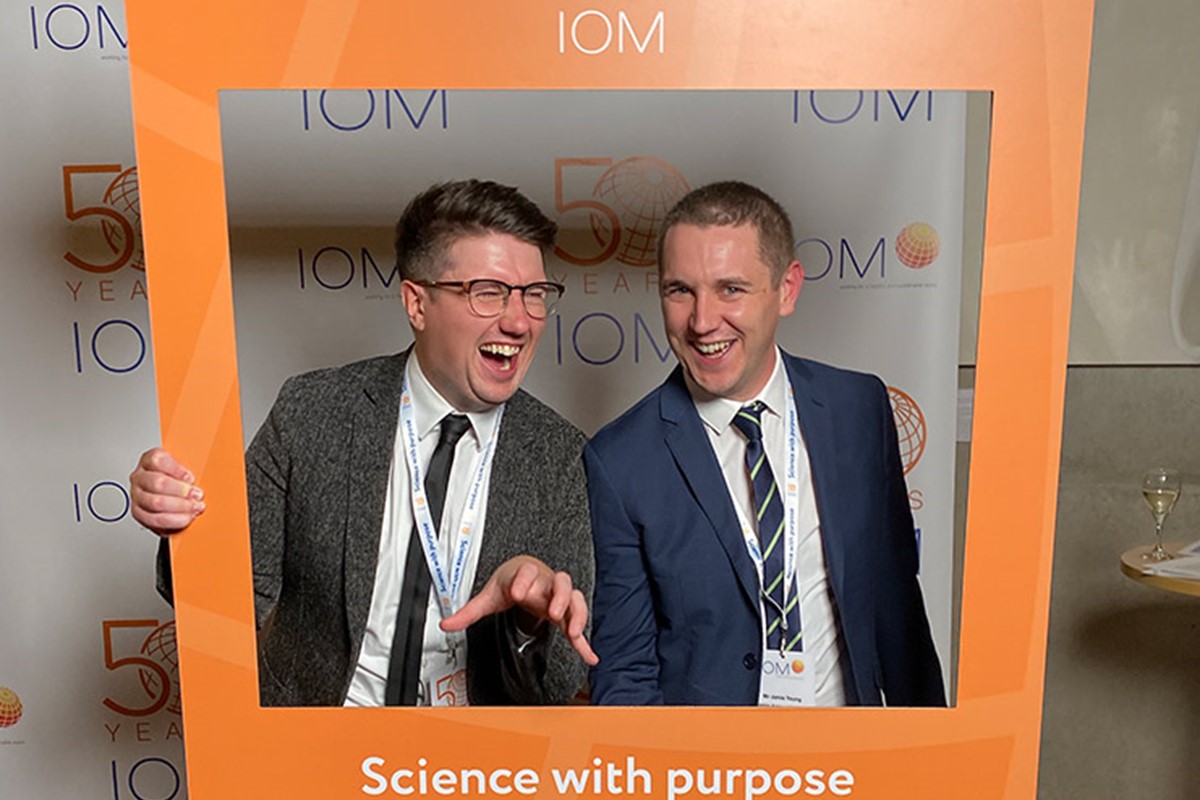 A night to remember

That evening, the celebrations moved from the chamber to the magnificent garden lobby at Holyrood where our artwork was exhibited and celebrated with friends of IOM. The event was attended by 150+ guests, with distinguished guests attending from Singapore and others travelling especially to the event from the World Health Organisation.

Also in attendance was John Swinney, Deputy First Minister of Scotland who spoke passionately about IOMs contributions and how our campaign was an inspiration to young minds and scientists of the future. He spoke to us about our inspiration behind the idea before selecting his favourite; a poster representing IOMs work in identifying the impact of passive smoking in bars in Scotland which led to the smoking ban being passed. 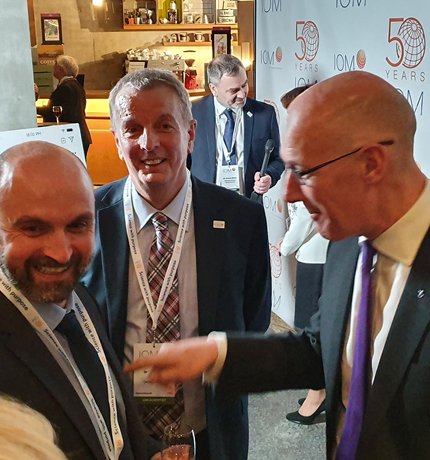 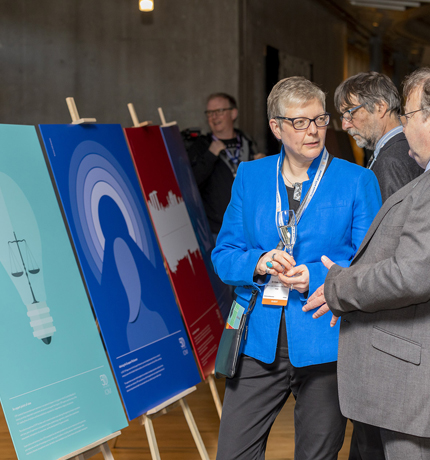 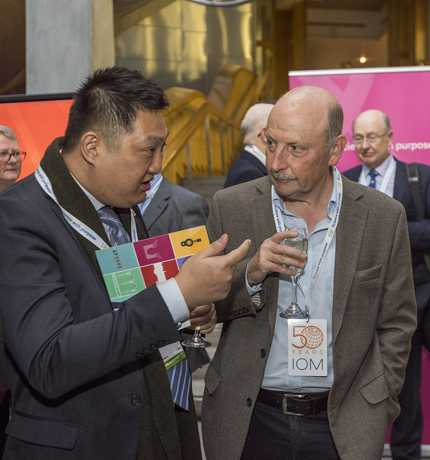 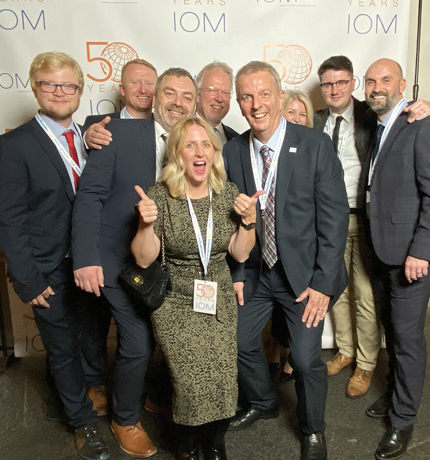 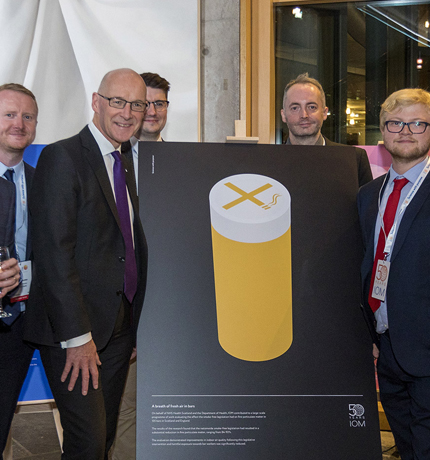 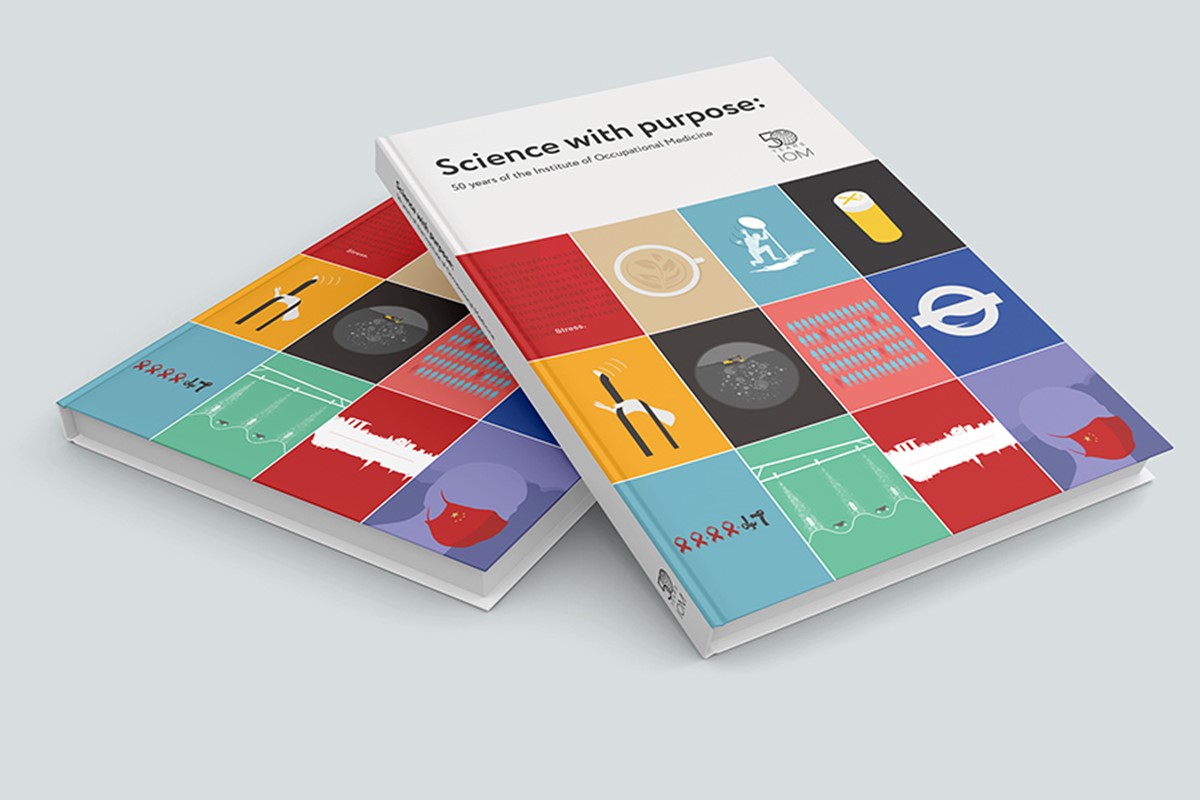 To mark the 50th, IOM published a book and asked us to help. We designed the cover and named the book "Science with purpose" which has since been adopted as the positioning statement for the brand. The book was part of several event materials we designed for the event and exhibition at Holyrood as part of the goody bag for attendees. 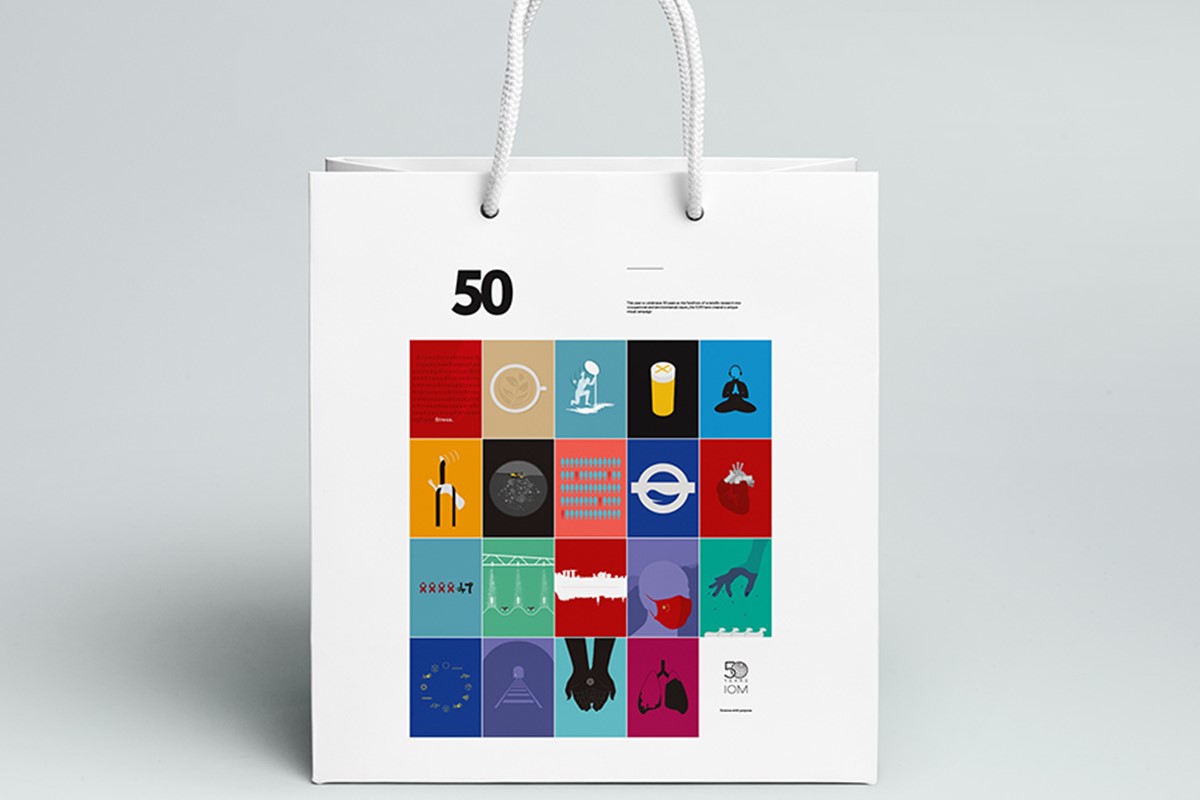 The campaign met and exceeded all objectives and the posters now live at IOM HQ to inspire IOMs people. We definitely got on the political agenda, with them being debated in parliament and with John Swinney attending the evening event and talking passionately about their work and the campaign — and we even got them in the news, as well as securing 9 months of exhibiting at the Glasgow Science Centre.

It's been picked up on social media by T-Shirt designers. IOM have gained wider international recognition with new customers and partner audiences and the campaign led to an increase in lead generation of 49%.

"I've worked with Three Part Story this year on a complicated campaign with numerous moving parts. The campaign has been a triumph in terms of the innovative way that Three Part Story has assisted IOM in communicating fairly dry scientific subjects. I've worked with the team from design to execution and can't fault them. They are a vital part of our marketing team. As a result of the campaign we've seen a significant increase in engagement both externally and internally, and we have been able to pinpoint several new deals and leads that have come in from the campaign. I can’t recommend them highly enough."